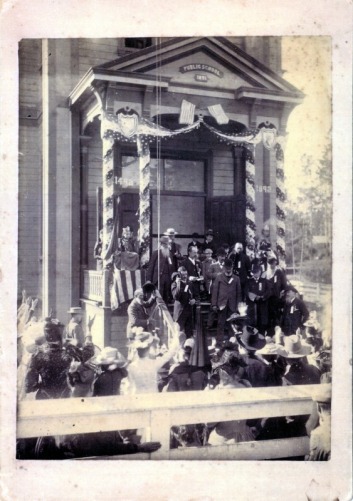 The opening of Pacific Grove’s first public school on Monday, April 13, 1891, was a big celebration. Almost everybody in town came to celebrate. Lots of people were happy to see that the first real school building was ready. The school was named Pacific Grove Grammar School.

One year and six months later, the townspeople came back to the front steps of the school to celebrate the 400th anniversary of Columbus’s discovery of America. 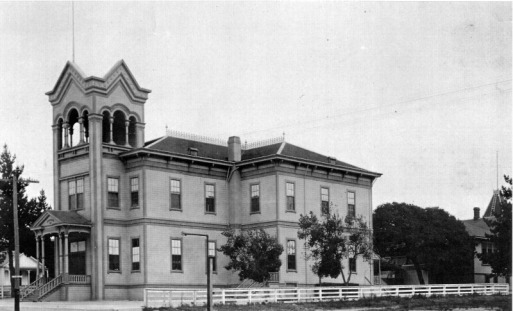 In those days, 14th Street connected Pine and Spruce Avenues. The school was located east of 14th Street facing Pine Avenue. The two-story building had four rooms and was topped with a prominent third-story belfry, or bell tower. Between the front and back of the building, there was a separating hall (entered by doors at either end), in which a noble stairway rose from each door to near the middle of the hallway above. The belfry was entered by a portico reached by a broad flight of stairs. It featured a bell, which was rung to announce the beginning of each school day. From the summit of the belfry, 48 feet high, a fine flagstaff supported a regulation American flag that spread in the breeze nearly 70 feet from the ground. 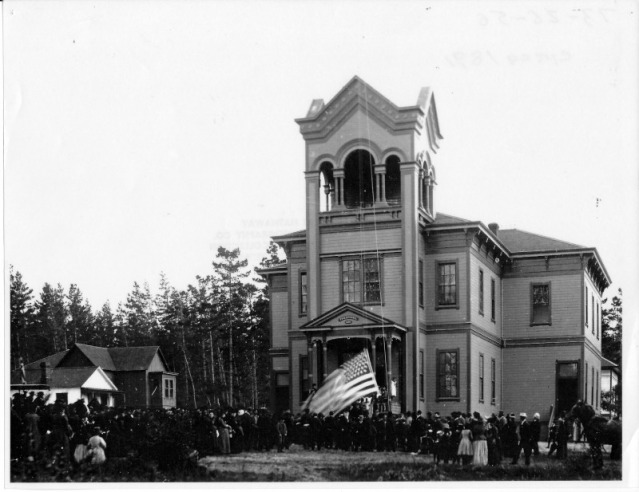 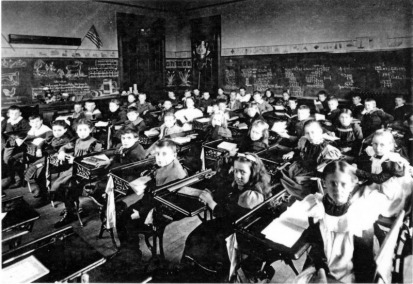 All four rooms were the same size and consisted of kindergarten, two elementary classes, and high school. Later on, in 1901, high school was on the ground floor, sixth through eighth grades on the second floor, Grades 1 through 4 in a back building and kindergarten in a building farthest back, next to Spruce Avenue. 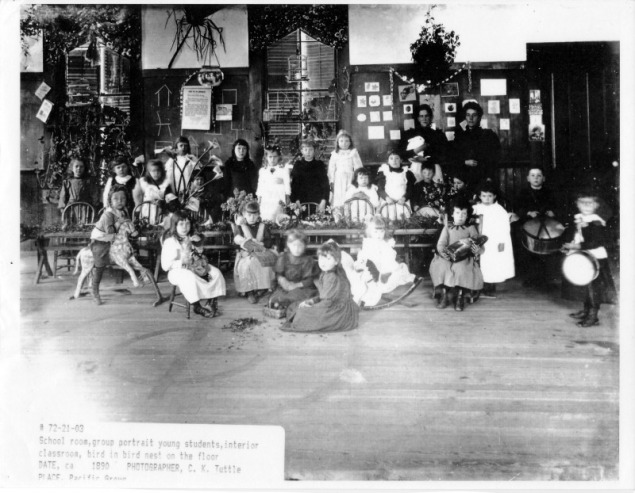 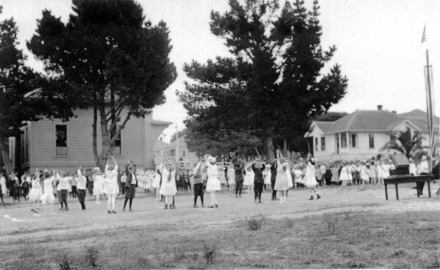 During World War I, Pacific Grove Grammar School had a “Victory Garden”. Students and teachers grew their own vegetables so that Pacific Grove schoolchildren and their families would have their own food and farmers could grow food for the soldiers fighting in the war. The Victory Garden was in back of the building about where the upper field is now. Each class, teacher and student had an individual plot. Everyone used hoes, shovels, rakes, and water pots to take care of the garden. 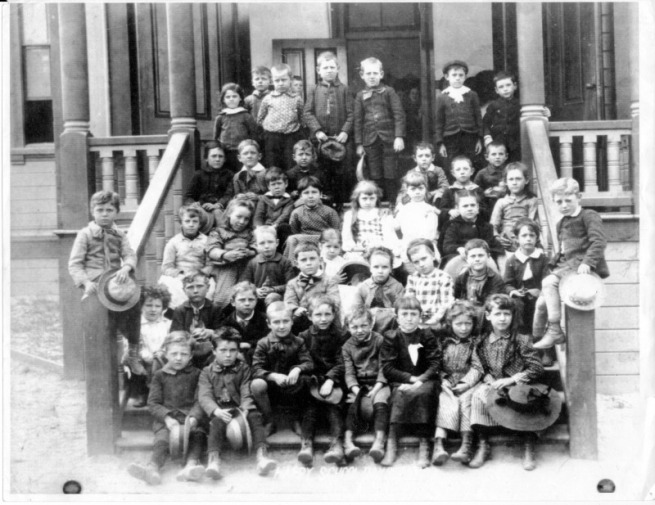 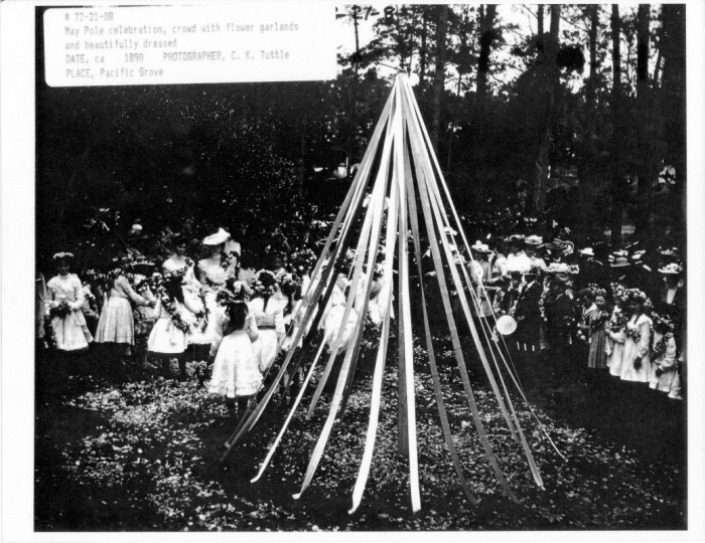 During the 1890s Maypole Dances, the children had to wear certain clothes. The girls wore white dresses, garlands (flower crowns), and flower sashes. Some boys wore uniforms, and some wore sashes. The teachers wore long, fancy skirts and large, fancy hats. Parents were there, too, and they wore the same kinds of clothes as the teachers. As they were doing the dance and when they finished with the braids, Mr.Tuttle, a local photographer and druggist, took pictures. It must have been fun to do the Maypole Dances. 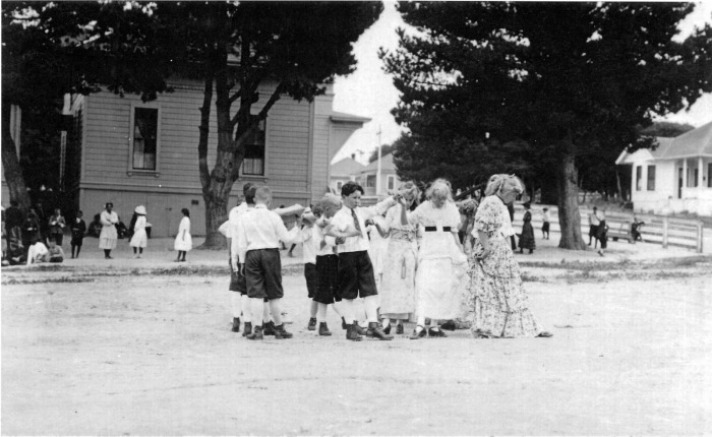 After Pacific Grove Grammar School was built, the location of the dance was moved to Fourteenth Street beside the school (This is the near the place where a wagon drawn by four mules would drop off kids from the Defense Language Institute). Students performed the Maypole Dance by moving in and out around the pole while holding onto the ribbon and dodging the person in front of them. By this time, both boys and girls danced the famous Maypole Dance. Also, other dances were done besides the Maypole. Music was provided by a Victrola (an old-fashioned record player). 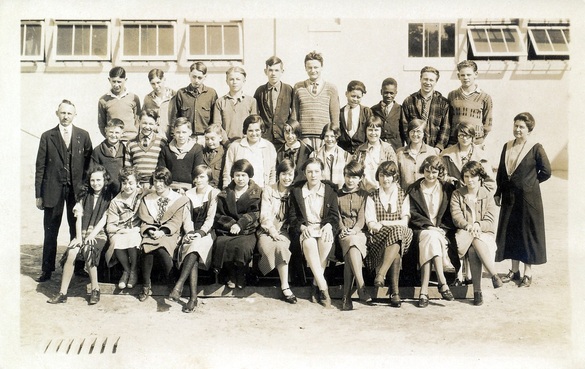 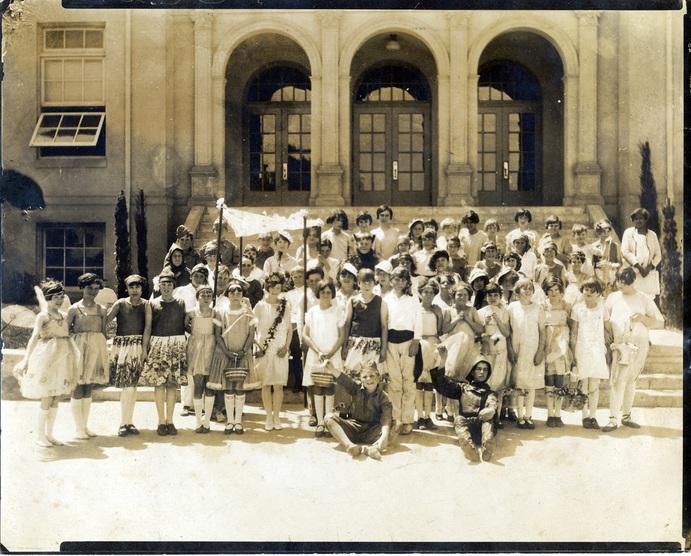