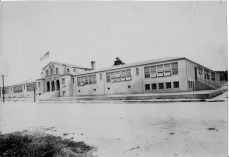 This web site is dedicated to preserving the photographic history of Robert Down Elementary School. The site will continue to add photographs as they are collected, scanned, and uploaded. If you have any photographs that you would like added to the site, please contact me at sibrahim@pgusd.org. Any photographs would be greatly appreciated. Thank you.
FATHER OF ALUMNI – Robert Hodge Down (70)

Robert H. Down, prominent educator of Pacific Grove, died Sunday morning in a local hospital, following a long period of failing health. Mr. Down served for over 31 years as principal of the Pacific Grove Elementary School, retiring in 1945. During his administration the school grew from a registration of 200 pupils to 1,300, and a faculty increased from eight teachers to 35. For 35 years Mr. Down was a member of the County Board of Education and its president for four terms. He resigned from the board in December, 1951. All Pacific Grove schools will be dismissed at 1:30 o’clock tomorrow afternoon as a gesture of respect to the memory of Mr. Down, Supt. Thomas Turner announced this morning. He was born Jan. 26, 1882, in New Idria, the youngest of five sons in a family which had come to California from Cornwall, England. His father was superintendent of quick silver mines during early days in California, and young Robert’s first 10 years of life were well epitomized in the film “How Green Was My Valley.” San Jose Graduate. The family moved to San Jose in 1882 and Mr. Down there attended school, graduating from San Jose State College – then known as Teachers’ College – in the same class with Carmel Martin. He received his early teaching experience in Guerneyville, Hacienda, Almaden, and Los Gatos. His marriage to Miss Ethel Harriet Webster took place in 1907. Mr. and Mrs. Down and their children came to Pacific Grove in 1914, when Mr. Down became principal of the elementary school. His retirement years were saddened by the death of his wife in 1947, and that of a son, Kenneth, in 1950. Mr. Down was a life member of the Parent-Teachers’ Association of Pacific Grove. He served for a time on the County Welfare Board, and was a member of Pacific Grove Lodge 331, F&AM, Ocean Spray Chapter 68, Order of Eastern Star, and of the First Methodist Church of Pacific Grove. He had a genuine love for the city of his adoption and a deep pride in the part he played in educating its citizens. During his later years he found his greatest pleasure in reminiscences of former teaching days. He often said, “I’ve had a full and interesting life, have met lots of interesting people, and made lots of fine friends.” He leaves two sons, John W. Down of Pacific Grove and Webster Robert Down of Sonora; a daughter, Mrs. Ruth Oeser of Sesebo, Japan; eight grandchildren, Donna Kennedy of Marysville; Janice, Jay, Bob, Dennis and Kenneth Down of Pacific Grove; Carl and Eddie Oeser of Sasebo, Japan; and one great-grandson, Garrold Lynn Kennedy of Marysville. Funeral services will be held at 2 p.m. Tuesday in The Paul Mortuary, with the Rev. Bernard W. Lowry officiating, assisted by the Pacific Grove Masonic Lodge. Burial will take place in the family plot at El Carmelo Cemetery. Active pall-bearers will be Robert Getz, Lee Weber, Corneil G. Culp, Ernest McAnaney, Reginald Foster and Andrew B. Jacobsen. Honorary pallbearers are Paul Varien, Harold Harper, Judge Henry G. Jorgensen, Dr. J.J. Williams, Dr. Paul Hicks and Thomas Turner. 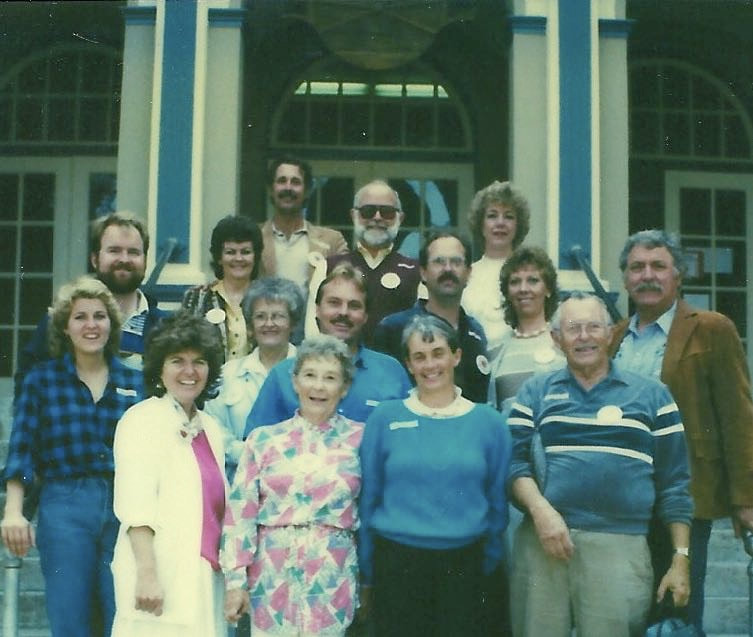 ​Front row: unknown woman; Iris Down (John's wife); Janis (Rulofson) John's daughter; and John Down
Second row: My mother Pat Thorne sister of Iris; Bob Down (John's son); behind him is his brother, Dennis (deceased) and his wife Sharon; and Ron Rulofson (Janis' husband, deceased).
Third row: I don't know the man with the beard; Gail Down married to Jay, who is right behind her.